The history of Lan Yin hua bu fabric, is long enough to be traced back to Song dynasty (year 960–1279) when it was known as “Yaoban fabric” or “Medicine speckles” (traditional medicine is normally herbal liquid, and the colour from the Lan Yinhua bu fabric comes from the plant extraction liquid as well. ). In the Ming and Qing dynasty (year 1368-1912), it was called “Jiaohua fabric” or ‘watering the flowers’. As it is an indigo dye, the fabric has a rich blue and white colour with a steady luster, known as “Lan Yinhua fabric”.

Why is the blue of Lan Yinhua fabric so pure? – Because of its bluegrass plant dyes. According to historical records from “Journey of Qing Emperor Guangxu in Tongzhou city”, the process of producing dyes was first to harvest and then immerse the bluegrass in stone vats for couple of days, afterwards the decaying fermented leaves are taken out before adding the lime into the vats which is the precipitate. The final earthy dye is known as “Tu Dian” (dried indigo). In traditional medicine, the leaves of bluegrass named “big green leaves” have a high medicinal value. 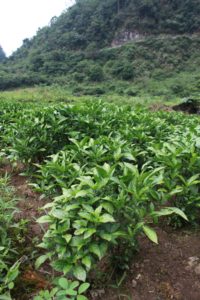 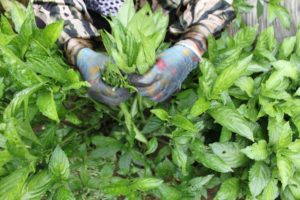