Resist printing is the common man’s decorative fabric of traditional Asian textiles, which begins in Han and Jin dynasties and comes to maturity in Tang dynasty, 1,300 years ago.

In Han and Jin dynasties, people had developed the principles of resist dyeing creating beautiful and creative patterns. It became prevalent in Tang dynasty and into Song dynasty along with others techniques such La Xie, (color wax-printing/batik), Zha Xie(tie-dyeing) and Jia Xie(indigo print.

The earliest unearthed stencil version of resist printing remains is a wax-printing cloth with white and small seven-flap flower pattern and straight dots on blue from Xiliang period, 1,500 years old, from Turpan Ashtar of Sinkiang. Another relic is a piece of rough cloth with white flowers on blue, unearthed from the Yulaike ancient city of Northern Dynasties, located in Yutianwu, Sinkiang. 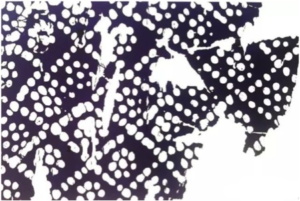 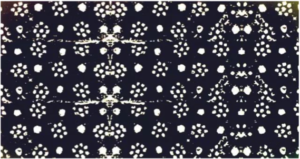 Disconnected big and small spots patterns seemed to be popular at the time. The craft was likely to have been done by engraving patterns on a thin wood stencil followed by wax and resist dyeing. This was the embryonic technology of resist print stencilling.

In the Tang Dynasty resist print craft appeared utilising paste made of lime and plant ash, leading to the development of soybean meal & lime powder resist paste for Lan Yinhua fabric. With the development of oiled paper for the umbrella industry, the technique of using this kind of stencilling became the norm.

From the Southern Song Dynasty, Lan Yinhua dyeing craft had substituted other resist printing crafts because of its easy access to raw materials and ability to produce a variety of patterns. The craft expanded from south and north of the Yangtze River,  it became popular, selling locally and other regions, and later to Japan, where it was introduced globally.

The use of soybean meal and lime powder as the resist print paste for producing the Lan Yinhua fabric is still used to this very day, where the Lan Yihua craft is still uses the traditional way of dyeing.